Gold? Even after all of the mining that's been done in human history, there's still tens of exagrams of it on Earth alone. Once your civilization moves into space, there's even more of it to be had. It's not particularly rare, in the grand scheme of things.

But, it turns out nobody but us humans really cares about gold, silver, platinum, palladium, or any of the other metals we call "precious," except inasmuch as they are useful materials in a commercial or industrial sense. They think it's weird, frankly, that we humans are so interested in acquiring more of a soft, highly ductile transition metal that is really only worthwhile for its high conductivity-- and then alloying it with more useful materials to make jewelry. Sheer madness, right? But if we're willing to buy, they're willing to trade it for more useful stuff.

Not the Ihoin. Unlike other xenoids, the Ihoin don't really have much interest in trading with us, as they outclass us by a couple centuries already. Except. Like other aliens, they don't value precious metals the way we do. And these guys don't trade them either. Right? But they have electronics, and fusion coils probably. They must be mining gold, at least, and palladium, and maybe other metals, along with all the other resources they extract. As a result, legends have cropped up all over: Nth-hand stories, from a friend's, friend's, brother's, sister-in-law's mother, whose diplomat nephew saw a storeroom once that was filled to bursting with neat little hexagonal gold ingots, just stashed by the Ihoin for future use alongside all the other junk.

Which brings us to you. You're an independent trader and salvage worker. You took out a hefty loan to purchase your ship, and have been doing plenty of work in the Coreward Branch. Some legal, some not so. It's gotten you by. But if even a tenth of these old spacer stories are true, the Ihoin are sitting on stockpiles of materials somewhere that could make you a very rich being.

Time to find out.

Since the high score system isn't working from within itch.io, hey post your high scores here

Just wanted to say that I love the stars.

Seems like a cool roguelike, I'll have to play it more in depth later. 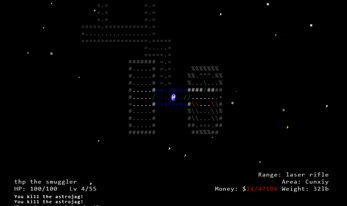